By Elisabeth Paranormal Romance May 23, 2013 0 comments 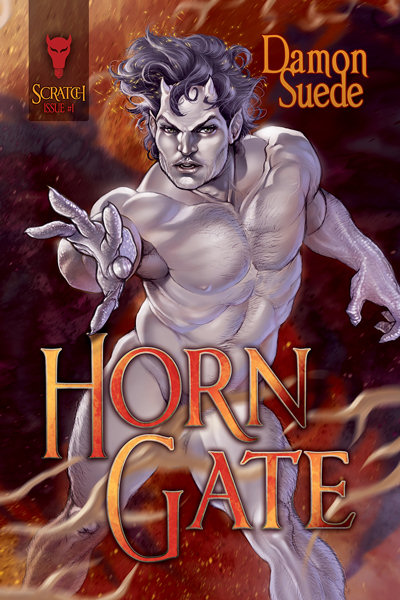 True to form I’m doing things a little bass-ackwards. I posted a review of Horn Gate on the group blog I contribute to, Paranormal Unbound, just a couple of days ago… and NOW we are doing the cover reveal. We paranormal authors like to keep things interesting. So after you’re done checking out the cool cover here (which was drawn by a badass comic book artist Rey Arzeno) and entering the giveaway, stop by Paranormal Unbound for another chance to win a big bundle o’ Damon Suede swag and a free book! This is a fun and fresh take on paranormal romance, I hope you’ll enjoy it as much as I did:

Open at your own risk.

Librarian Isaac Stein spends his lumpy, lonely days restoring forgotten books, until the night he steals an invitation to a scandalous club steeped in sin. Descending into its bowels, he accidentally discovers Scratch, a wounded demon who feeds on lust.

Consorting with a mortal is a bad idea, but Scratch can’t resist the man who knows how to open the portal that will free him and his kind. After centuries of possessing mortals, he finds himself longing to surrender.

To be together, Isaac and Scratch must flirt with damnation and escape an inhuman trafficking ring—and they have to open their hearts or they will never unlock the Horn Gate.

About Damon Suede:
Damon Suede grew up out-n-proud deep in the anus of right-wing America, and escaped as soon as it was legal. Though new to romance fiction, Damon has been writing for print, stage, and screen for two decades. He’s won some awards, but counts his blessings more often: his amazing friends, his demented family, his beautiful husband, his loyal fans, and his silly, stern, seductive Muse who keeps whispering in his ear, year after year. Get in touch with him at DamonSuede.com.

My favorite bit so far…

One More Day! Hunter by Night is...

Hunter By Night Update and Giveaways!

Get Cozy With Thad & Isabel–Win King...