Spotlight On: Talent to Burn by Laura Welling

Please help me welcome Laura Welling, whose debut Urban Fantasy released on the same day as Hunter by Night! Man there’s tons of cool stuff out this week. I can’t wait to check it out, and I hope you will too: 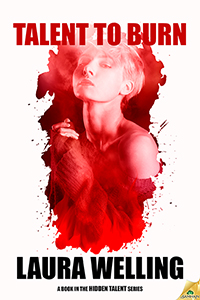 About Talent to Burn:

END_OF_DOCUMENT_TOKEN_TO_BE_REPLACED

In just a couple of days I leave for the Romantic Times con in Kansas City, and I couldn’t be more excited! Last year I had a blast. So many readers in one place, such great organization, and so author-friendly. I’m still in awe over the way shipping lost a box of books I was supposed to give away at a panel, and the RT volunteers went all over the place trying to help me get it back. Those folks kick ass. END_OF_DOCUMENT_TOKEN_TO_BE_REPLACED

Dearly Beloved,
We are gathered here today, to join two awesome things in a state of increased awesomeness.
Today, we’re bringing together an author/reader mini-con, and the chance to WIN YOUR WAY IN FOR FREE!
That’s right, ladies and gentlemen… you will all have until October 6th to hop around from author to author, blogger to blogger, and enter at every stop to win one of 3 FREE REGISTRATIONS to Olde City, New Blood, the upcoming urban fantasy/paranormal romance mini-con in St. Augustine, FL next February.
You can check out the official website for the complete list of Featured Authors (I’ll give you a hint… one of them is ME!!) and Featured Bloggers. There’s also a main contest post with all the participating authors, bloggers, and dates for the contest. It’s super easy. Visit each of the spotlight blog posts and author websites listed, fill out the Rafflecopter link on each one (one entry PER POST, not per day… and yes, they will be checking), and POOF, multiple entries to WIN!!
The prize is one of 3 FREE REGISTRATIONS to see me and about 49 other authors on the sunny beaches of St. Augustine, Florida, from Feb 8th-10, 2013 (AND IT’s MY BIRTHDAY YOU GUYS!). We’re going to be doing panels, readings, meet & greets, and just generally having a fun weekend with our incredible fans!! Please keep in mind, if you win, you’ll have to cover your own travel and hotel expenses, but your ticket into the party will be on Olde City, New Blood!!!
The contest runs from September 30th – October 6th, and the 3 winners will be announced on September 7th. Don’t forget to click the Rafflecopter link below before you hop off to check out the rest of the contest posts!! Good Luck, everyone!! I hope to see you ALL in Florida this February!!

So Anton and Tyra’s book, Prince of Power, is almost finished.  It’s available for pre-order already and Amazon, B&N, and BaM, and the ARC is already up on Netgalley, I think. (correction: some of my street team members said they checked and no, it’s not on Netgalley yet, I was mistaken about that one. Sorry, folks. I’m sure it’ll be up in the next couple of months, I recall about a 3-4 month lead time on King of Darkness)

The last round of edits were longer and harder than I expected. In fact, I confess this whole book has kind of been a struggle for me. I think that’s natural. King of Darkness was not my first piece of fiction, but it was my first book. My first balls-out, full-length, multiple story arc, multiple POV full-length novel. I love that story, always will, and for my first effort I’m quite proud of it even though looking back I see a thing or two I wish I’d done differently. Prince of Power, was my first sequel. Turns out sequels are hard. You’re no longer writing a book in a bubble, there’s a waterfall

effect. You have to write the book so that it will make sense to anyone coming into the series late, but also so that anybody who read the previous story will feel that you did justice to the continuing story line. Tricky. I love Tyra and Anton’s characters and I pray I did it well. I certainly tried my bestest, and I hope you love them as much as I do.

And now, on to Lee and Alexia. I’ve been doing a lot of research for this one, which means more upfront legwork, the writing itself has been slow going. Lee’s character has been a little nebulous up until now, and I finally get to crack him open and see what makes him tick.  I’m really excited about that. There are a lot of details yet to be finalized, but in the meantime I thought I’d share the inspirational photos I’ve been using for Lee and Alexia’s characters.  Enjoy!

It’s Gone from Suck to Blow!

Okaaay, I am sort of burning the candle at both ends lately (I know – those of you who know me well are snickering: “Sort of?” “Lately?”). SO I guess I should say, worse than usual. Look, I’m a stress junkie, okay? I’m working to temper it, to make peace with it, but like an addiction, it may always be with me and it’s far more socially acceptable than passing out on my front lawn with a jug of Vanilla Mint Listerine nestled in the crook of my arm. But the gist is that I am feeling a little inside-out and upside-down today, hence this morning’s blog title. Sorry guys, I am not very lucid at the moment. Moving on… Beautiful Blue is finished!! I want to say how blown away I am by the response I got from this little experiment, so thanks to all of you who followed along. I wrote this story in a very different way than I usually work, and I was nervous that it would turn out to be a miserable failure, but I’m getting lots of great feedback from my Facebook and Twitter followers, and I have even been asked if I will repackage and sell it as a novella (maybe/probably) and if there will be a sequel/prequel (as soon as I have time to write one – those of you who are willing to provide free babysitting so that I may augment my writing hours, please leave a comment and references below). I was especially psyched one morning recently to stumble upon a blog by Mina Burrows (just for the record we are not related, and I didn’t bribe her in any way) who had written up a WONDERFUL review of Blue and also mentions King of Darkness, which I used to have an excerpt of posted on my main web site. I am finishing up work on King of Darkness this weekend!! Donations of caffeine are appreciated, btw. 😉 The manuscript has been shelved for the past few weeks in an effort to get a little perspective (meanwhile, working on the sequel, Prince of Power) but as I near my deadline I am shaking out the pages and knuckling down to work this baby over one more time. I have an AWESOME new critique buddy who has been wonderful and patient enough to slap me around and hold my feet to the fire, so that KofD can be at its best by the time I send it to my editor. Damon, by the way, is a terribly talented writer of gay romance and has a book coming out soon with Dreamspinner Press about love and the New York Fire Department (Hot in more ways than one! Come on, I had to say that…) and I encourage you to check him out. Happy Friday, folks!!