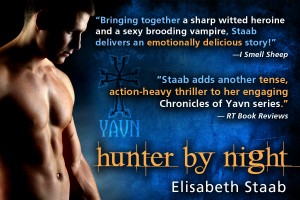 I ran across something in my files that I thought I’d share today: A cut scene from the very beginning of Hunter by Night, written from Lee’s point of view. It’s actually one I loved and hated to cut, even though from a technical standpoint it does very little to move the story forward, and there’s an awful lot going on for so early in the story. Mostly, it just tells about stuff that already happened in previous books / previously in the characters’ lives. That tendency to dump a ton of character backstory is a lingering bad habit of mine. Still, if you enjoyed Lee and Alexia’s story, you might enjoy this deleted scene.

After several long days in the fluorescent-lit training facility and nights spent cycling through the fight pit, the obstacle course, the woods, or the running trail and occasionally checking back in at the mansion to change out of soaked and ripped clothes or talk with Thad, Assessment week was finally over. The guys who made the cut were paired with experienced fighters for their “on the job training.” The ones who showed promise were invited to try again the following year. The ones who hadn’t were sent home.

Now, on his way to the first hot shower he’d had all week, Lee faced a rare, discomfited moment. Speechless, thanks to female troubles of a sort.

In his younger, stupider days, Lee had met a young vampire hybrid with gorgeous pale skin, one whose mother had been a succubus. He’d been fooled by her false innocence, her charm, thought she’s seemed sweet and she couldn’t help that her mother was a wily demon who preyed on unsuspecting males for fun and games, now could she?

Well, that was before his lovely mate, Agnessa, managed to make a charade of him and their union by fucking half the vampires on the compound including Thad back when he was still prince. Always ahead of the curve, Lee had become one of the few vampires to break a mating bond, and perhaps the only one to get away with punching a member of the royal family in the face.

Lee’s career as the royal guard had survived even if, deep down, his sanity nearly had died. That whole, horrible debacle had taken place the better part of three decades prior, and seeing her still filled him with the urge to kill. He’d sworn he would never trust, never love.

Proof that his sanity was still not up to snuff all these years later: he stood in the hall with his feet glued to the rug, sure his preternatural vision must have been deceiving him, because surely that was not Alexia coming in the door with her olive-toned arm slung around Agnessa’s powdery white shoulder. They were doing that… That strange, female, “I love you” half-hug he’d seen the women do outside of the bars downtown when they were stumbling out at closing time in their long heels and short skirts.

Their heads leaned together. Agnessa’s platinum hair shone bright and garish under the foyer’s mini-chandelier, but Alexia had let her hair grow long and let it go from bleach blonde to a soft, warmer light brown with blonde highlights. It suited her.

Whatever. The thing to do here would be to stop right where he was, turn toward the spiral staircase that led up to his room next to the king and queen’s master suite, and get into that shower. Tangling with his ex and the only female—a human woman, no less—to work her way into his gray matter since his split with Nessa… No good. Absolutely, without question, unequivocally, no good.

Down the hall, Alexia and Agnessa shared a giggle over something. For all he cared they could be talking anything from human politics to Agnessa’s recipe for fluffy kittens Au Gratin. You don’t care. Go take a shower. “Are you two drunk?”

“Not drunk. Mildly inebriated.” Alexia’s brown eyes had a little starburst of gold when she opened them wide and the light hit them just so. Every time he noticed, they hit him in the solar plexus. Like he’d never seen that little starburst before.

“I fail to see the difference.”

“The difference,” Agnessa said with her candy red lips curled into a devilish grin, “Would have been at least two more martinis.”

Oh for fuck’s sake. “And which of you drove?”

“No worries, Chief. I drove.” Siddoh, Lee’s next in command, swaggered in through the door. “I gave them a two-drink limit. I think someone slipped them some shots while I was in the bathroom but they’re not that loaded.”

Lee bit his tongue and tasted his own blood. His gums throbbed, broadcasting the jealousy, the rage that he would never speak aloud. He held the animal inside him back from the urge to grab Alexia by the arm, to drag her down the hall away from these assholes. He did not trust Agnessa, could not tolerate the idea of those two forming a friendship. And Siddoh… When had Siddoh ever been “just friends” with any female? Agnessa didn’t count. Siddoh couldn’t stand her.

That Siddoh took Alexia downtown, drinking and dancing all the time… They sat in her room on Siddoh’s nights off and watched movies together. For all Lee knew—

You don’t care, remember? Alexia is human. She may be beautiful, but her species is inferior, and cannot be trusted. She will die in a blink. She can never be anything important to you, even if you wanted. And you don’t want. Don’t mistake that you gave her your blood for something more.

They’d had an oddly intimate moment when she’d first come to the estate. In finding Isabel, Thad’s queen, they had also found Alexia, and she’d been unfortunate collateral damage that night, getting injured in a wizard attack. Lee had given her blood. Not the way he’d given blood to that recruit, but the full-deal. Mouth on skin, teeth, suction… Alexia’s lips, her moans, had nearly compelled him to take her right then on the bed.

Ever since, she’d done nothing but drive him to distraction. Lee could not afford distraction.

Alexia bit her lip. Her cheeks took on a red flush. She smiled only a little as she met his stare. Maybe she, too, remembered.

This is unnecessary torture. He turned toward the stairs.

“Leeland?” Agnessa reached for his arm. “Are you all right? You seem… troubled.”

“Yeah, bro. Even for you, you’re pretty cranked.”

Lee brushed off Agnessa’s hand. He turned to Siddoh. “Assessment Week is always taxing. And I did not go out dancing… Bro.”

“You should come sometime,” Siddoh offered.

He glanced at Alexia, who said nothing, only licked her gorgeous, soft-looking cocoa-colored lips. And stared.

Whatever. “I’m going to go take a shower,” he said, turning away. He flogged himself with his frustration and his memories of that night with Alexia all the way up the stairs until he was locked alone in his room and stripped of his clothes. He could think of other ways to relieve stress.

The water scalded his skin, pelted his body full blast as he gripped his erection. His hand braced on the tile wall, his strokes rough, as he relived that night. That one night, he’d had Alexia’s mouth on his skin. She’d run her tongue up his arm before pulling at his vein right from his wrist with those plump lips, sucking so hard he’d been loath to make her stop.

Reliving the warm heat of Alexia’s tongue, Lee stroked faster, his breath and blood for a change flying through his body with ease, their whoosh and pulse drowned by the rhythm of the shower.

He came with a growl, instantly angry. Embarrassed, even though he was alone. Each time, he swore he wouldn’t think of her again.

You are invited to a paranormal party!

I can’t be the only freak…can I?

All #vampire romance, all week long!