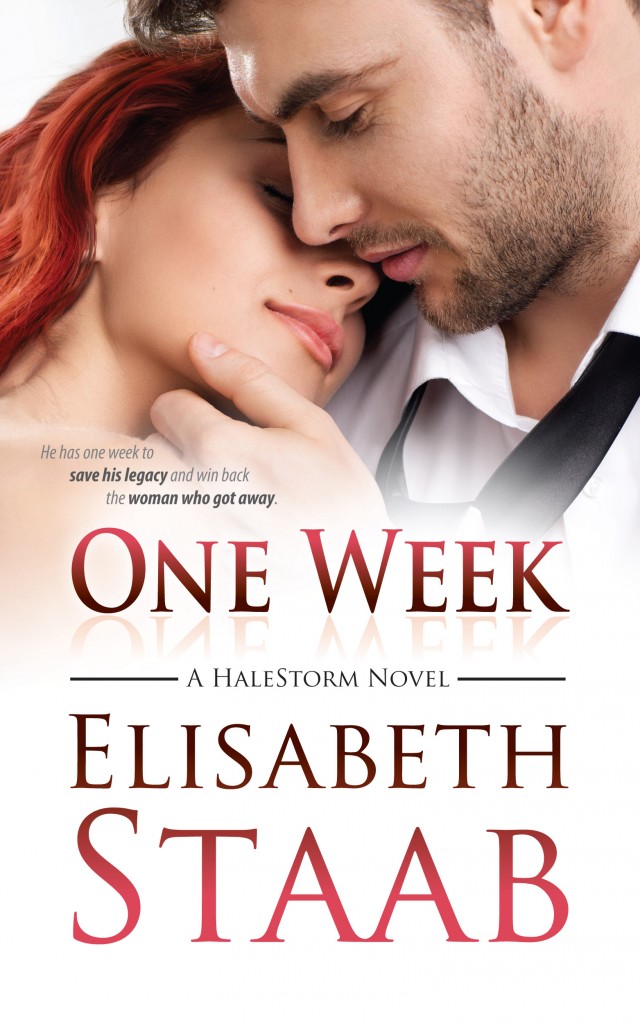 Michael Hale’s company is in jeopardy. In the wake of his father’s death and his transition to CEO, projects are circling the drain, and that could cost him everything. Come to find out, the consultant hired to fix things is the “one who got away” many years ago. This time he’s playing for keeps, and he intends to win.

Also, if you are a blogger/reviewer and would like a review copy of One Week, please fill out this form. Thanks so much. 🙂

“You called me innocent back there in that parking lot. I dressed conservatively that summer because I was supposed to. You thought I was some kid who had just fallen off the turnip truck?” She stepped forward. From the rise and fall of his chest, his breath had deepened, and she struggled to keep her focus on his hard, dark eyes. Still a little beer buzzed, she put herself up in his face and laid it all on the line. “You tried to protect me because you’d heard rumors about Scarborough? What about the rumors I heard about you?”

“What, you thought I wouldn’t have heard? Every woman at HaleStorm with a pulse and proper vision had your name written on their vibrators.”

This time she ignored the warning from her shoes when she clicked forward. “I didn’t let those rumors stop me, either. I’d been trying damn hard to get your attention that summer.”

He didn’t move except to blink. “The trouble with rumors is they’re half-true at best if true at all.” Then he did move, pressing into her space.

She hardened her gaze and met his stare, but there in the dim light of his apartment his eyes had turned the color of dark amber. And holy cow, those lashes could make any supermodel cry with envy. “Okay,” she said. “So what’s your truth?”

His fingers danced up and down her spine, setting off shivers all over the place. He bent toward her, his stubble scraping her cheek. “The truth is, you were probably right when you said that this was a bad idea.”

She had said that, hadn’t she? His palm skimmed her waist and she damned herself for being sensible. “That… that probably is true.”

“And.” The heat of his hands and his breath licked along her neck and shoulders. Maybe she should have worn her coat over. “You have no idea what’s fact and what’s fiction about me.”

What Elise did know was the way he touched her now might well fry her brain. She needed to back away while she still had some semblance of her dignity. She managed one step. “Maybe I don’t. My point is, neither do you.”

Other than a slight raise of his eyebrows, he didn’t reply. Fine. Well, about that whole leaving with her dignity intact plan….

Another step. “Whatever. Thank you for trying to protect me. It was a misguided, unnecessary effort, but thank you for being concerned.” Finally, with a clench of fists and a huff of breath, she turned on her throbbing heel and stormed for the door.

His fingers came around her wrist as she grabbed the doorknob. “Feeling smug now that you’ve gotten the final word?”

“Well I’m certainly feeling something.” Hot breath on her cheek, bare chest against her arm, and a really impressive erection against her backside for starters. And damned if her bones weren’t turning to liquid right underneath his fingers, because what the hell was she thinking? He was a client, after all. Not even the best mathematical minds in the world could calculate the infinite number of ways this could get her into trouble.

Michael laughed, low and rough. If sounds had fingers, this one would have practically yanked her underwear to the floor.

King of Darkness is on sale!