Oh, hey guys! There’s still a giveaway going on to win a copy of Prince of Power over at Manga Maniac Cafe! Go enter!

And now, I’ve got a deadline and sick kids, and I think I am quite nearly all blogged out. I gotta go give Lee the appropriate attention. And the kids. I shall (hopefully) keep you occupied for the time being with some funny things I found on the interwebs. Go and have a good laugh, dammit. We could all use one couldn’t we? I sure could.

Oh, and if you like historical romance, there’s a fun chat coming up on 1/29 at Discover a new love. Chat with some awesome historical romance authors from Sourcebooks and win great prizes. Books, jewelry, and more! Go here for more info.

The Pen is Mightier than the Storm & The Prince’s Gamble

Everybody, I’m honored to have Caridad Piñeiro here today, talking about her wonderful fundraiser to help the Jersey Shore and to share her sexy, suspenseful release from Entangled, The Prince’s Gamble! Please give her some love!

For me the real heart and soul of New Jersey is the Jersey Shore with its miles and miles (130 to be precise) of beaches and of course, the boardwalks.  The first one appeared in Atlantic City in 1870 and it is currently the world’s largest.

The boardwalks are the place where all of New Jersey comes together.  Rich or poor, all different races and ethnicities, it all comes together on the boardwalks where people come to not only have fun and relax, but live and work.

When Hurricane Sandy struck, it destroyed homes and businesses and of course, the boardwalks all up and down the Jersey Shore.  As I saw the damage to the homes, businesses and boardwalks in my area, I knew I had to do something to help to rebuild and restore the Jersey Shore.  For that reason, I’m donating my share of the proceeds from sales of THE PRINCE’S GAMBLE, which is set in Atlantic City, to the Hurricane Sandy NJ Relief Fund.  My hope is that we can start to get things back to normal so that all the people who live and work in the area can resume their lives.

Here is a little blurb about THE PRINCE’S GAMBLE:

Prince Alexander Ivanov is scrambling to save his reputation and his livelihood. One of the Russian Nights Casino’s hostesses has disappeared, and his business is suddenly under investigation by the FBI for associations with the mob and money laundering.

Special Agent Kathleen Martinez has no patience with rich, entitled aristocrats, especially one like Alexander Ivanov whom she believes is involved in the vicious human trafficking ring which she’d tried—and failed—to shut down two years earlier. With a second chance to bring him to justice, she goes undercover in the casino, but instead of facing the villain she expected, she finds herself battling a sizzling attraction to the man.

Now, forced to work together to trace the source of the illegal activities, the danger—and the passion between them—grows out of control, and they slowly begin to realize the biggest danger isn’t to the casino, it’s to their lives…and to their hearts.

Here is a little excerpt:

Kathleen took a long, surprised look at the image in the dressing room mirror.

Tatiana had been recruited to help her get ready for tonight’s introduction to Petrov. Alexander had invited him to one of the premier events, an exclusive invite-only wine tasting, being held at Russian Nights that evening, and since it was a formal affair, Kathleen had to be dressed for the occasion.

The form-fitting merlot-colored gown and three-inch heels from one of the casino’s designer shops that Kathleen was expected to wear hadn’t been enough to please Tatiana. Alexander’s sister had insisted on a full beauty treatment at the spa, including a facial, haircut, pedicure, and mani.

The end result was a woman Kathleen didn’t recognize as she did a slow turn, stunned by the change. Liking it more than she thought she would, and yet discouraged as well.

This glamorous female in the mirror was the kind of woman Alexander would want in his life. A polished and primped and expensive woman. A woman she could never be, other than as her pose as the  [prince’s current lover].

“I’m not sure this is a good thing considering how dangerous it is for you, but I think Alexander will have a stroke when he sees you and Petrov . . . let’s just say he’s dead if he doesn’t notice you,” Tatiana said. She stood to one side of the dressing room, a conflicted look on her attractive face. A face that reminded Kathleen way too much of Alexander’s, with its coloring and perceptive blue eyes.

“Our relationship is not what you think, Tatiana.”

“Sure, Kathleen. Keep on saying it and maybe it’ll be true,” Tatiana teased, but then her cell phone chirped and she excused herself to deal with the call.

Kathleen shook her head and with a last look in the mirror, made sure the wireless earpiece was securely placed. A sleek black clutch sat on a nearby settee. Kathleen grabbed it and the familiar weight of her small pistol tucked inside reassured her.

That pistol and her job were what she was. Not this glittering and almost unrecognizable version of herself in the mirror.

A knock came at the door and she called out, “Come in, Tatiana. I’m ready.”

When she turned, however, it was Alexander standing there. A dangerous gleam entered his gaze as it danced across the new haircut, make-up, and dress.

“Ready for what, I wonder?”

Thanks, Caridad! And after you’ve stopped by Amazon or B&N, stop by Caridad’s blog where I’m sharing an exclusive excerpt from Prince of Power and talking about my favorite reason for writing about vampires. 😉

Happy 2013, everyone! This week marks the official kickoff of my Prince of Power blog tour! Anton and Tyra officially hit shelves and e-readers on January 8th, and the virtual blog tour is ON. Lotsa fabulous giveaways, and I shall attempt to keep you apprised of where I will be and when I will be there. Are you following me on Facebook and the Twitters? I announce the occasional special contest there, as well.

Oh. Awesome news. Right now, get King of Darkness in ebook at B&N, Amazon, and iTunes for only $1.99!

K! So here we have the list of guest blog / giveaway stops!

Also, please be sure to swing by on January 16th, when I will be swapping blogs posts with best-selling author Caridad Pineiro, who is doing a wonderful fundraiser for the Jersey Shore.

Wishing you a joyous and prosperous New Year! Will have more soon!

Wanna check out the new Prince of Power trailer? See it here (many thanks to Rachel Firasek for the awesome trailer):

If you missed yesterday’s chat at Discover a New Love, you can go read what you missed, here! We had a fun discussion, Barbara Vey was awesome, and the hour flew by! Thanks so much to all of you who stopped joined in. 🙂

And, The Darkness tour is still going on! Tes Hilaire and I are having a great time on our summer Darkness tour, and we have a few dates of giveaways left! 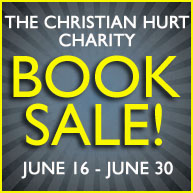 Me, My Shelf and I Book Blog is hosting a fantastic charity book
sale you can not, should not and will not miss!
In an effort to raise money for MMSAI blogger Kayla’s cousin
Christian Hurt’s neck surgery, for an injury he sustained during a football game
last year, MMSAI called out to every one for book & swag donations. The
response was overwhelming and now they have HUNDREDS of awesome books, a lot
signed, some first editions, swag, movies, gift cards and even A KINDLE FIRE AND NOOK TABLET!
Stop into THE CHARITY BOOK
SALE page on MMSAI,
June 16th at 9am
CST
and get your hands on one
of dozens awesome book packs priced at $25.00. There will also be a few auctions
for author related services and larger book packs and if you want that Kindle
Fire or Nook Tablet all you have to do is buy a book pack…they are hiding
randomly in 2 of them!
These packs won’t last long, so don’t be late! And be sure to
check that link between now and there from time to time as sneak peeks to the
goodies will be put up through out the time leading to the sale date!
You are going to buy books this year anyway, why not get a
bunch for a great price and have all the proceeds go to charity?
For more info on the charity event, Christian Hurt and his
injury and to see some of the stuff that is in the book packs, visit MMSAI
Also, don’t forget MMSAI is giving away $25 Amazon GC
for helping spread the word, check out the contest here
and good luck!
Share